Skip to content
When you buy through links on our site, we may earn an affiliate commission. Learn more here.

The American muscle car is legendary and has been celebrated, not only by enthusiasts, but in film and music. Consumers looking to experience the power of a muscle car but also want the benefits of modern technology, are looking for the Chevy Camaro or the Dodge Challenger.

Between these two cars, there are a couple of similarities. It is the differences, however, that will sway consumers more in the direction of one or the other.

The Camaro has seating for four individuals. The Challenger states that there is room for five. These may be ambitious estimations, however.

Between the two, the interior cabin of the Challenger is much roomer – offering more legroom and headroom than the Camaro overall. While both vehicles are most comfortable for the driver and the front seat passenger, the back seat in the Camaro is very limited.

Most adults and children are constrained in the small backseat area. The back seat in the Challenger has a bench seat designed for three people. While the back seat may still be snug, it is more comfortable for longer trips than the Camaro.

These differences will cause shoppers to consider how they will be using their vehicle. If your desire is for a muscle car to take out on the open road, consider the Camaro. If you want to share the experience or will be using the car for family activities, look into the Challenger.

For maneuverability in town and parking lots, you may consider the Camaro. It is slimmer and slightly smaller than the Challenger. Some drivers feel more comfortable maneuvering it in traffic and tight parking spaces.

Both the Camaro and the Challenger have similar mileage ratings. The Camaro gets 14-20 mpg in city traffic and 20-30 mpg on the open road. The Challenger has 13-19 mpg in town and 21-31 on the highway.

The Camaro has a lightly higher torque giving it a little more power. It also presents a little more horsepower. Both the Camaro and Challenger have versions with different engine options.

For instance, the Camaro offers a turbocharged 4-cylnder while the Challenger has an all-wheel drive choice. To start, the Camaro has a 2.0-liter turbocharged inline four that deliver 275 horsepower and 295 lb.-ft of torque.

The Challenger has a 3.6-liter V6 with 305 horsepower and 268 lb.-ft of torque. At this lower end, the Camaro is superior when considering performance and fuel economy. On the higher end models, the Challenger’s pure power and torque raise the bar for performance.

Muscle cars inspire visions in the hearts of many. Their history of defiant, powerful engines and beefy styling make them very desirable.

While many feel nostalgic about the brands, they will be delighted to find the same aggressiveness of yesteryear paired with modern comfort and technology. So ultimately it comes down to what consumers are looking for.

For a muscle car that doubles as a personal car on a commute, the Challenger may be a better option. For the driver on the weekend, the Camaro is worth looking at. The higher end Challenger’s power can not be missed, though. These muscle cars will remain similar but very, very different.

In a muscle showdown between two of America’s favorites, the 2016 Chevrolet Camaro and the 2016 Dodge Challenger split their winnings in a match-up of pure power.

With a bigger build than the Camaro, the Dodge Challenger takes pride in its classic design in comparison with the contemporary muscle cars. And despite maintaining the traditional feel to the car, Dodge developed ten different models for the 2016 batch of Challengers.

Despite coming with a smaller build than its opponents, the 2016 Chevrolet Camaro makes up for his size in power under the hood. Available in four different 2-Door models: the Coup LT, the Coupe SS, the Convertible LT, and the Convertible SS. The new generation of Camaro’s is full of surprises.

The main surprise is under the hood of its base model. For the first time, Camaro fans will be able to buy a turbocharged four-cylinder, which will still keep the base Camaro in the range of economic muscles. With the four-cylinder engine, the Camaro consumes an estimated 30 mpg on the highway. And while it is economic, the base Camaro can still put out 275 horsepower. 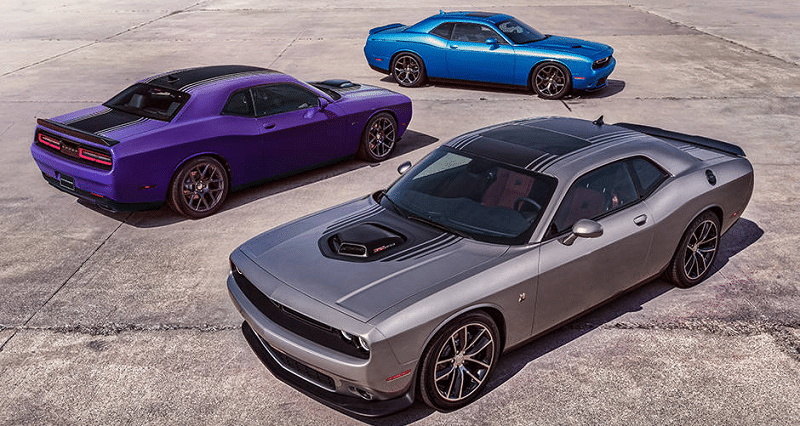 The Challenger STX Plus has the advantage over the four-cylinder Camaro. Running on a Regular Unleaded V-6 engine, the STX Plus has 305 horsepower, and can run an estimated 19 mpg in the city and 30 mpg on the highway.

READ  Where Are Chevy Silverados Made? (Are They Made In The USA?)

Now when we turn to the prime time models is where the fun really starts. The Challenger SRT Hellcat is nothing short of a monster when it comes to power. With the Supercharged Premium Unleaded V-8 engine under the hood, the Hellcat is rated at 707 horsepower, which makes it according to thecarconnection.com:

The Convertible SS Camaro doesn’t come close to that kind of mind-shattering power, but it does more than fine with its powerful V8 engine. The SS packs 455 horsepower and can make it from 0 to 60 in about four seconds.

While it might lose in power, the Camaro certainly takes the edge when it comes to driver experience, most specifically to adapting the car to the driver.

With its Drive Mode Selector, the driver can tailor the Camaro to his style, changing settings like shift timing and stability control.

Now let’s get to the pricing. With its vast array of models, Challenger prices vary a fair amount. Ranging from the base SXT starting at $26,995 according to Dodge.com, to the flagship SRT Hellcat, starting at $64,195 according to the Dodge website. Nevertheless, models in between like the R/T Scat Pack are available starting at $38,995.

Having only four models to choose from, Camaro prices don’t show such a gap in between the base and top models. The base LT model is listed at Chevrolet.com starting at $26,695 while the SS can start from $42,295 according to the Chevrolet website.

This site uses Akismet to reduce spam. Learn how your comment data is processed.