If you’re thinking of swapping out your car engine for something a little stronger, a V8 engine is always a popular choice.

Having stood the test of time, V8s are versatile and powerful engines that can make your car even more fun to drive.

Swapping in a V8 engine

The V8 engine is noteworthy for its eight cylinders set in a V shape pattern.

The cylinders can be set at either a 90-degree or 60-degree angle.

A V8 is a lighter and more compact engine option that still supplies a great deal of power.

V8s are known for their excellent horsepower and torque but are also some of the more versatile and flexible engines.

Traditionally, a V8 engine runs smoother than other models and beautifully balances performance with efficiency.

It is easy to swap the V8 into many different kinds of cars because it can power both large and small vehicles.

The engine itself, depending on the version you get, comes larger or smaller to better fit with your car.

Swapping an engine is usually done for practical reasons.

If your engine fails, you can swap it out instead of buying a new car.

Swapping is a common tactic when you’ve bought a cheap, broken-down car.

Putting a V8 in an older car can sometimes be more affordable than trying to maintain the original engine or buying an entirely new vehicle.

Sometimes swapping is done to increase the power and economic benefits of an engine.

The V8 is much more reliable than other engines, so swapping can revitalize your driving experience.

If your goal is to create a fun ride, installing a V8 can increase torque, horsepower, and much more.

While not a usual choice for a V8 swap, the Volvo 240 can handle the power.

This wagon is the ultimate “sleeper” because it looks exactly like your family vacation car.

A V8 engine not only works well for this model, but it also is a shock to anyone expecting to leave you behind.

A Nissan Z platform has a vintage straight-six engine which many drivers love.

However, if you don’t want to maintain a vintage engine, a new V8 will add all the reliable power you could want.

The same is true for drivers who aren’t fans of the straight-six.

The V8 is an easy swap that will last longer with better efficiency.

The S2000’s VTEC engine is enough for most people to contend with.

But some car enthusiasts prefer swapping the VTEC with a V8 for superior torque.

The V8 is also a lighter engine that increases speed and agility for this speedy ride.

A notoriously fun ride, the Mazda MX-5 Miata is often upgraded and modified for bigger and better pursuits.

The addition of a V8 is one of the more popular choices among owners.

Putting an extra 400 horsepower together into a Miata only increases the excitement of the ride.

However, if it’s in good working condition nothing can stop the E30 from gaining miles.

Adding a V8 engine takes this fun little ride to the next level.

The E36 is the next-generation vehicle for BMW’s E30.

It’s got a light, rear-wheel-drive platform and has become much more popular for V8 swaps in the last few years.

From 1975-1996, the Jaguar XJS was manufactured as a luxury grand tourer and one of the most affordable sports cars ever built.

Its V-12 engine has enough power to make the point.

But V-12s are known to be unreliable and are even more so twenty-five years later.

Swapping for a V8 keeps the rest of the car intact while giving it another chance as a powerful high-speed demon.

The RX-7 is a popular car to swap for many reasons.

First of all, it’s easy to modify.

You can take the basics and turn the rest into your own.

Second, the RX-7 comes with a rotary engine.

Unfortunately for the RX-7, rotary engines are notoriously unreliable and often fail.

That’s where the V8 comes in.

A V8 engine provides the perfect reliable power for an already cool car.

If you have the money, the Turbo model of the Porsche 944 can give you all the power and energy you could want.

Alternatively, finding an older 944 and putting in a V8 engine will get you enough horsepower for less cost.

Swapping a Porsche 944 is a cheaper and more reliable option than going all out on a Turbo.

Often Porsche owners, like many other car enthusiasts, balk at modifications.

Adding a non-Porsche element can seem like an act of degradation.

Despite this, V8 swaps have become much more popular for the 911.

A V8 is a viable option for replacing a failing flat-six engine.

If you’re looking for a cheaper resolution to fix up a Porsche 911 and you want some horsepower, the V8 engine is a great choice. 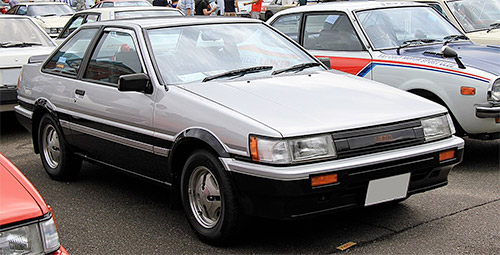 A Corolla AE86 with a V8 engine has become increasingly popular for the drifting crowd.

The engine gives the power, and the Corolla provides stability and steering.

The V8 is particularly great for drifting because it offers so much more torque for better maneuverability.

Like the Toyota Corolla, the Nissan 240SX is quite popular with drift racers.

The car’s long wheelbase and balanced chassis make it a fantastic drifting vehicle.

The added torque from a V8 engine would only complete the picture.

Swaps are commonly completed for the Nissan 240SX as it is easy to upgrade to a bigger engine.

There are many great car choices for V8 swaps.

Whether you’re considering the Mazda Miata or the Porsche 911, the V8 will give speed, torque, and reliability to any model.

Any car with a newly swapped V8 adds an element of fun.