A three-point turn, or K turn, is a moderate vehicular maneuver that involves turning a vehicle around on a roadway to drive in the opposite direction when there is nowhere to pull off the road to turn around. 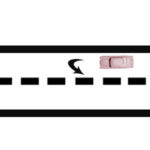 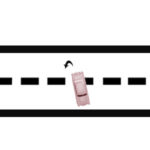 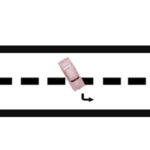 It is a standard way to turn around when there are no adjacent or perpendicular roads or drives to pull into (or off in) to turn around more seamlessly.

A three-point turn (Y turn) requires a strong curving turn, followed by backing up, and then a soft turn forward.

To perform a three-point turnabout:

The three-point turn is the most common turn required in driving tests.

Depending on where you live, this test may be performed on a closed track with cones or on the open road.

To perfect a three-point turn for a driving test, practice driving on a narrow, two-lane road with limited traffic.

Choose different spots on the road to turn around.

Once you get used to the 3-point turn, it will become more intuitive, much like looking over your shoulder before changing lanes.

Risks of a Three-Point Turn

Three-point turns should not be used in cities or towns where there are plenty of opportunities to turn around and regular traffic.

The greatest danger of a three-point turn is that it leaves you in the middle of the road for an extended period of time.

During most of the three-point turn, your car also blocks BOTH lanes of traffic.

Ideally, you would only use this turn on a country route with few businesses or houses and no other place to turn around.

If there are any adjacent roads or drives, a two-point turn is almost always the safer option.

The biggest danger during a three-point turn is other cars.

Another car can come up on you at any point during this turn, and you will be blocking the roadway.

That’s why, when making a 3-point turn, the most important thing is to be constantly aware of oncoming traffic in either direction.

Before even starting this turn, it’s essential to ensure the road is clear for a substantial distance either way.

Since ensuring the roadway is clear is imperative for making this turn safely, it should only be performed on a section of road with excellent visibility both ways.